The Last Door Wiki
Register
Don't have an account?
Sign In
in: Pages using duplicate arguments in template calls, Characters, My Dearest Visitor,
and 2 more

Scholar (psychology and the science of the occult)

Johan Kaufmann was a psychiatrist and the student of Professor Adam Wright. He was the companion of John Wakefield. He first appeared in Episode 3. Wakefield seems to be very fond of Kaufmann, as he mentions Kaufmann with every major discovery he has done from Episode 5 onwards. He even loses his entire motivation to look for Devitt when Kaufmann disappears from play. Kaufmann dies of an unknown disease at the end of episode 6.

"Johan Kaufmann is a close friend of doctor Wakefield, 40 years old. German, he’s very rational and hard to show his feelings. He can be a little bit eccentric sometimes."

It’s possible that Kaufmann was (or is) part of The Playwright. He certainly knows more than an uninvolved person should. At the start of episode 6, Wakefield is puzzled by the death of Miss Konhe. She seemed to have exploded into a storm of crows. Somehow Kaufmann was aware that this might would happen and proposes to get help from his former mentor Wright.

I’m guessing that Kaufmann was an independent investigator, just like he seemed to be. He probably worked with Wakefield because he needed a collaborator that he could trust. I’m sure Kaufmann didn’t tell Wakefield everything, but it’s hard to say whether he withheld any important information.

About Kaufmann's guilt and the clue[]

Chapter 8
Alexandre implied that Kaufmann died because he was a companion of Wakefield, who was a “traveler.” Kaufmann, Anna, and Old Mike were all companions of travelers of the Veil. They were all ill for a few weeks before they died. Alexandre apparently hoped that Old Mike would recover, but Kaufmann and Anna both knew that they were going to die. Unlike Anna or Old Mike, Kaufmann died before his companion entered the Veil. 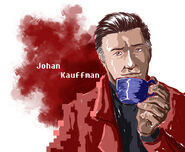 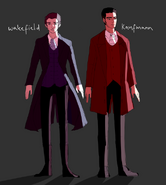