Jeremiah Devitt is the protagonist of the first season of The Last Door. He spent most of the season investigating the death of his childhood friend, Anthony Beechworth, and uncovering the mysteries of his own past.

"Jeremiah Devitt is just a normal person who lives a simple life in London, where he teaches Classic Philosophy at University. He lives a lonely life, dedicated to his work. He doesn't usually receive visits and he spends most of his time, immersed in his studies."

However, it's unclear whether this information is canonical.

If Devitt has close family or friends, he does not mention them.

He seems to have come from a wealthy family. His mother died around 1870, when he was still young. After his mother's death, his father sent him to St. Gall, a catholic boarding school in Aberdeen, and apparently had no further contact with him. At school, Devitt was socially isolated until he befriended a student named Anthony. Together, they started a small, secret club that was devoted to discussions of science and philosophy.

Fifteen years later, in 1891, Devitt received a letter from Anthony. It read, “Videte ne quis sciat”, which was the motto of their old school club. Devitt became concerned, as he had not heard from Anthony in years.

He went to Anthony's home, where he discovered that the servants had quit and that Anthony and his wife were dead. Devitt also found evidence that Anthony had recently become mentally unstable. He had been experimenting with chemical compounds and keeping track of suspicious deaths around England. Near the mansion, a blind cat and a flock of crows were unusually intelligent and aggressive. On Anthony's body was another note that was also addressed to Devitt. In that note, Anthony claimed that the members of their old school club were in danger, and he begged Devitt to return to St. Gall. The crows found Anthony's body and mauled it, but they ignored Devitt.

Devitt apparently notified the police. He began hypnotism sessions with Dr. Wakefield, where he uncovered memories of having seen a large, terrifying bird’s eye. He also realized that he could barely remember his time at school.

He returned to St. Gall, where he found that it had been converted into a catholic hospital. As he explored the hospital, he found records of several patients who had recently died under mysterious circumstances. He realized that the head of the hospital, Father Ernest Glynn, had once been an instructor at the boarding school. He eventually recalled that Anthony had invited Ernest to join their science and philosophy club. Together, they had experimented with injections of serum. Soon afterwards, Ernest became mentally unstable and the school closed.

As Devitt investigated the hospital, Ernest confronted him, saying that they were both part of “The Four Witnesses”. In the 1870s, the Four Witnesses had used serum to enter a place called the Veil, where they had been seen by “the eye of the bird”. In the present day (the 1890s), Ernest had recently started injecting patients with serum in the hopes that they could answer the bird's call. However, each patient that was injected had died (with one possible exception). As he talked to Devitt, Ernest suddenly became overcome with emotion. He set himself on fire and died. His assistant, Frank Baldwin, overpowered Devitt and buried him alive.

It's unclear what happened next. Devitt seemed to find himself in the Old Nichol Street Rookery, a slum in London. He encountered several odd characters, including a fortune teller, a violin player, and a man who reads books in the dark. As Devitt explored the rookery, the environment became more fantastical (at one point, a tree started glowing). He briefly saw a glowing bird's eye through a keyhole. The violinist said that the bird's name was the Simurg.

A mysterious man led Devitt into a misty area that contained a theatre. On the stage was man who introduced himself as Alexandre. He claimed to have also been a member of the science and philosophy club. Alexandre said that the bird was protecting them and that it had intentionally brought them together. He told Devitt that they were part of a performance. He gave Devitt a mask and invited him to join.

The nuns at St. Gall freed Devitt from the coffin in which he had been buried. They found a syringe in the coffin that contained traces of an unknown substance. After a day, Devitt regained consciousness and left the hospital.

Devitt went to Alexandre’s house in East Sussex. The house was empty except for Alexandre, who was in a deep trance. There were also signs that someone else was in the house (for example, there was a warm cup of tea), but Devitt did not see another person. He came across several notes describing Alexandre's research into the Veil. The notes suggested that our world is the shadow of another world, and that the Veil is a land of mists that lies between the worlds.

Alexandre eventually regained consciousness. At Devitt’s request, he injected Devitt with serum. Devitt had a series of disturbing visions before finding himself in a land of mists. Alexandre stood next to him. Together, they set off to find the door that leads to the other world.

About a year later, in 1893, Dr. Wakefield ventured into the Veil in order to find Devitt.  He found Devitt standing by the shores of a black sea.

Devitt led Wakefield to Zha'ilathal, a region of the Veil that contained the Last Door. Wakefield acquired much of the following information during his investigation of Zha’ilathal.

While Anthony was a student at the boarding school, he inherited a journal from his father. The journal described the Veil, the Last Door, and a custodian that guarded the door. It also included instructions for creating serum that would cause the recipient to enter the Veil. Around 1876, Anthony administered the serum to himself, Devitt, Father Ernest, Alexandre, and Hugo Ashdown. They entered the Veil and briefly glimpsed the custodian. The experience traumatized them, especially Father Ernest, who became mentally unstable. Although these events were kept secret, the change in Father Ernest resulted in the school closing.

Soon afterwards, Devitt founded a secret society called The Playwright. Devitt's goal was to reach the Other World, where he hoped to find the “Final Truth”. Devitt and Alexandre enlisted the help of Captain Skidd, a British soldier who had inadvertently entered the Veil during the Boer War. Skidd had encountered the custodian, but he had been able to protect himself and a companion from harm. Devitt returned to the Veil with Skidd as a protector. They attempted to reach Zha’ilathal, but the custodian drove them away. As a result of the attack, Skidd suffered memory loss and Devitt fell into a coma. He regained consciousness a few years later, but he had no memory of the Veil, the Playwright, or his time at St. Gall. Out of concern for his safety, Anthony and Alexandre decided to leave him alone until they could find a better method of reaching the Last Door. They had no further contact with Devitt until 1891, when Anthony sent the note, “Videte ne quis sciat”. Anthony apparently intended to offer Devitt a choice, though the nature of that choice is unclear.

After reaching the Last Door, Devitt told Alexandre that he intended to close it, much to Alexandre's dismay.

Depending on the player’s choice, either Devitt or Wakefield closed the Last Door, apparently permanently. The other character returned to London

In Chapter 1, Devitt had no memory of being at Anthony’s house. But in Chapter 4, he seemed to find Alexandre’s house without being given an address or directions. Maybe Alexandre gave him directions when they met in the Veil at the end of Chapter 3?

Did he actually leave the Veil after Chapter 3?[1] 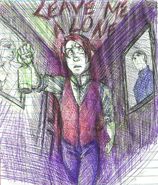 Jeremiah Devitt on the first episode of season one, The Letter